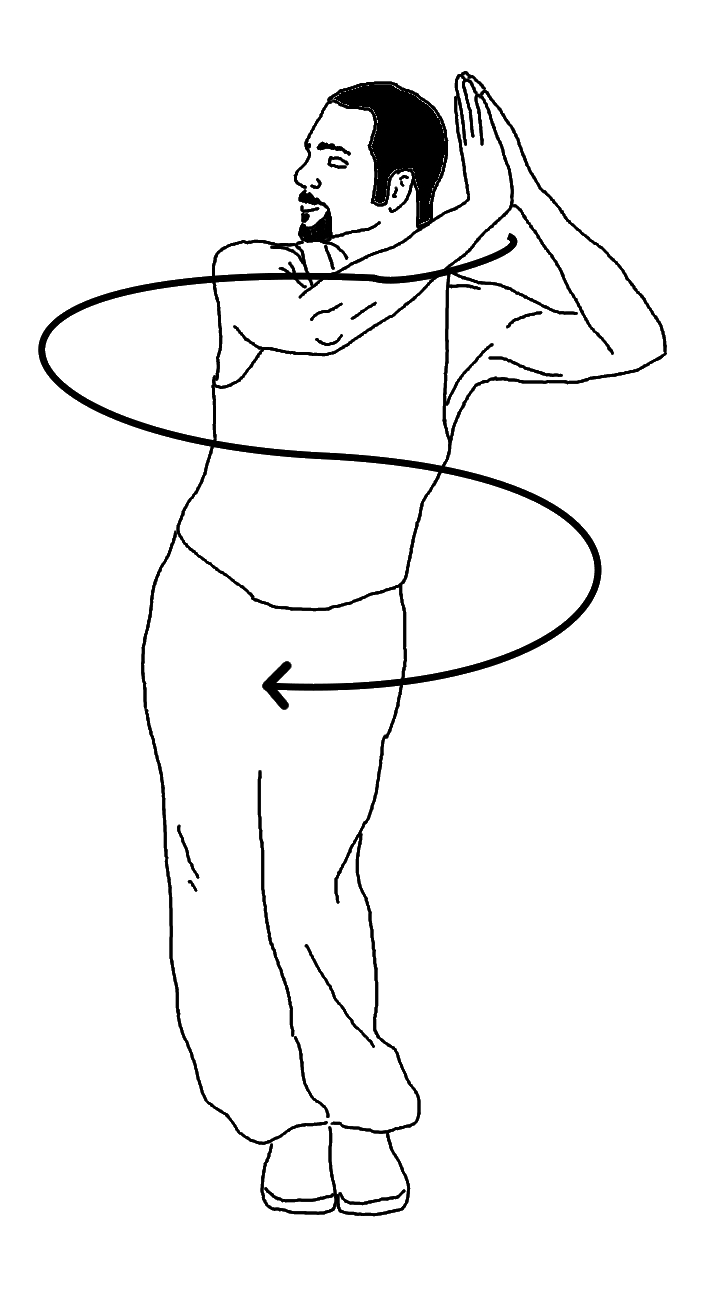 Swimming Dragon Qigong is an easy to learn exercise that can fit anyone's busy schedule and has tremendous health benefits.

The Swimming Dragon Qi Gong is named for the serpentine movement of the body while practicing which resembles a Chinese Dragon swimming. It consists of only one movement that can be repeated as many times as you wish. Because it is done while standing in place, it doesn't require a special training space, there is no stepping, and it can be practiced anywhere.

Practicing this Qi Gong exercise is very effective for stimulating the free flow of Energy and Blood throughout the body while breaking up any stagnation that might be present. This Qi Gong exercise also helps maintain the strength and flexibility of all the joints including the spine. In addition practicing this exercise also helps to strengthen all the internal organs and benefits the Kidney energy.

Traditionally the Swimming Dragon Qi Gong is also used to help promote weight-loss by working the physical body in many different planes of movement while strengthening the internal organs and energy.

As you practice, the body and hands move back and forth like a Dragon Swimming. This is where the Qigong movement got its name! The single movement continuously flows and can be repeated as many times as you want. This exercise also doesn't take a long time to practice. You can get great results by practicing for 5-10 minutes.

Many Qigong styles and exercises produce great benefits. But this Qigong is so easy to learn and simple to practice, it makes the benefits seem more astounding.

There are several versions of Swimming Dragon Qigong that are practiced today. The movements are similar, but not exactly the same. The version we teach comes from the Taoist on Huashan Mountain.

Sifu Fick first learned this exercise while he was in school for Traditional Chinese Medicine. It was promoted as an exercise that was simple enough to easily teach and easy for people to practice and gain the health benefits as it doesn't require any special practice area or take a lot of time.

"When I first learned this Qigong, I did not know anything about its' history or origin. I just knew it was a very good exercise. When I did some research, I found that this exercise has a very rich tradition behind it and why it had entered into the circle of education in Traditional Chinese Medicine."

When Mr. Bian ZhiZhong was a young man, before the Communist Revolution in China, he met an Taoist Abbot from Huashan Mountain who taught him qigong exercises. Because of the secrecy that some traditional sects have and the prohibitions on teaching others, he practiced these exercises for decades without anyone knowing it.

In the 1980's China was going through changes. It was now not so illegal to share traditional practices, especially if they were promoted for health only or wrapped in modern language and science. At this time, many people were interested and looking for ways to promote and cultivate improved health.

Mr. Bian, at the urging of some of his friends who were high ranking members of the Traditional Chinese Medicine communities, hospitals, and universities, shared some of the exercises he had learned with the public. The exercises he shared became very popular and many people were interested in learning more. He shared even more of the tradition that had been passed to him by a Taoist Abbot when he was young. Many people practiced these exercises, there were practice groups around the country, and many people reported the positive changes they experienced after practicing these exercises.

The exercises also became popular in Traditional Chinese Medicine circles and were taught in the schools as well.

After doing research on the origin of the Swimming Dragon Qigong he learned while in school studying Traditional Chinese Medicine, Sifu Fick saw that the exercise he learned had come from a larger and richer tradition. It was not just a single exercise.

Wanting to offer his students and patients who were interested in going further then practicing a single exercise, he used his years of experience practicing and teaching qigong, to adapt some of the other exercises from the tradition to create a short set of 5 movements. Students have been happy with this short set and we teach it in our Swimming Dragon Qigong course for people who want to do more then a single exercise.

We teach the Swimming Dragon Qigong as a single exercise and a short set of 5 movements call the Hua Shan Short Set that we adapted from the longer set of movements that were taught as part of the Taoist Hua Shan tradition.

We teach the Swimming Dragon Qigong exercise by breaking it down into its parts. The exercise can look complicated when you see it for the first time. But, if you break it into parts and learn those parts, you can put it together and practice correctly very quickly.

The two main parts of the movement are:

When you look at these parts individually, you realize that it is not that complicated. When you put these two parts together, you are practicing the qigong exercise.

This set is for anyone who wants a practice that goes beyond the single exercise of Swimming Dragon Qigong. It consists of five exercises that are all easy to learn. It gives a more complete workout for the student.

How to Learn Swimming Dragon Qigong

If you read the above description and are interested in learning Swimming Dragon Qigong, it would be almost impossible to find someone near you teaching our curriculum.

You could take private lessons from us online to learn this style. The drawback of this approach is that private lessons cost more then regular classes because of the one on one teaching and attention you receive.

We developed an online course for just this reason. You get high quality instruction, with all the details, delivered to you right at home through the internet. You can watch the classes anytime you want and as many times as you want. And, you can repeat lessons and go back to review anytime you want day or night. And the best aspect of online courses is that they cost less then other methods of learning.

So you save money, learn when ever you want, review or repeat lessons as many times as you want, and as a bonus you receive access to a Private Student Only Forum where you can ask questions and get feedback.